News / Press / Livestock / A New Role at the Royal

A New Role at the Royal 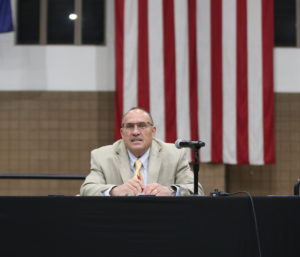 When asked about his favorite part of the job, John Boddicker answered, “the people.”

Formerly serving as the Executive Vice President at the American Maine-Anjou Association (AMAA), Boddicker has moved on to a new job, announcing the American Royal breeding shows.

This is his second year taking on the responsibility.

Before retiring in December 2015, Boddicker served the AMAA for 25 and one-half years. In his role with the association, Boddicker wanted to share the benefits of using Maine-Anjou in both a commercial and purebred operations.

“I saw a lot of changes but during that time the breed grew and gained a lot of acceptance, obviously in the showring, but one of the bigger accomplishments is that we made some strides from a commercial acceptance standpoint,” Boddicker said.

Boddicker was at the AMAA during changes which shaped the breed into what it is today.

“I was there through transition and growth in the breed from the full-blood genetics to what you see out in the ring today.”

He is now serving the American Royal as he announces placings for exhibitors and their families during the show.

“My favorite part of announcing is getting to see all of the people that I know through the industry.”