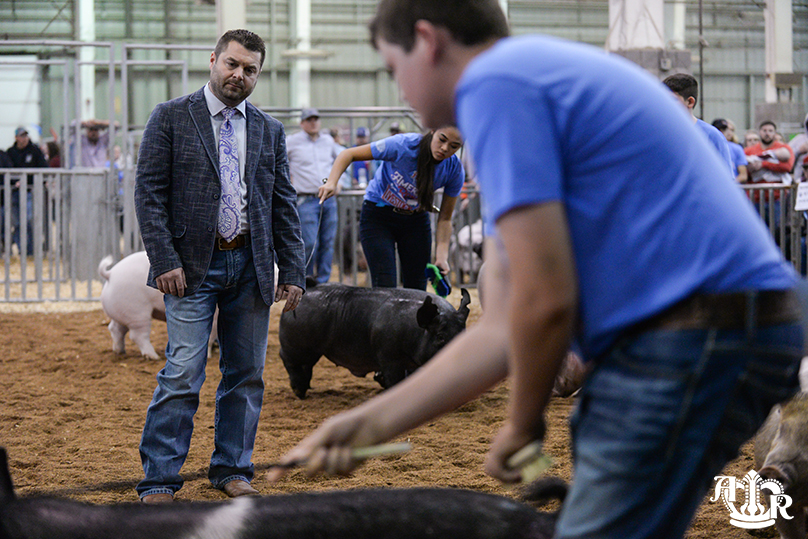 This year’s Crossbred Market Hog judge, Andy Rash, has been judging at several shows the last
two to three years and grew up showing livestock. However, he never showed at the American Royal as a junior exhibitor.

“My kids do though,” Rash said. “However, they had to sit out this year, though, so dad could
judge, but they usually show here every year.”

While Rash’s obvious expertise is in hogs, his kids will be trying to show goats on top of swine
this year. They’ll even be showing their goats at the American Royal.

Rash said, “We don’t know much about [goats] so we’ll have to see how we do!”

His kids were a clear voice at the ring today, talking to dad in-between classes and even asking
for a few dollars to use at the concession stand.

In January, Rash got to judge to the market swine supreme drive at the National Western in
Denver. When asked if he would go back again this coming year he said, “We’ll see! [My kids]
like to show there so we might go instead of judge.”

Rash was also expressive about the rise of quality in shows like the American Royal.

“I judge a lot of these, and I’m sure they’re sick of seeing me as many as I’ve done [recently],
but the thing about it is they keep bringing better animals and the kids keep getting better so
the constant improvement is sure enjoyable to watch,” Rash said.