News / Press / General / On the Other Side of the Camera

On the Other Side of the Camera 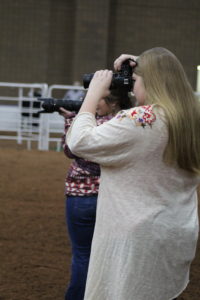 Photographers have a much bigger job than most people realize. While exhibitors are putting their all into showing their animals to the best of their ability, photographers are putting their all into capturing the moment with hundreds of photos. And, at the same time they are snapping pics, they have to be careful to stay out of the way of exhibitors and their animals. The last thing any competitor or photographer wants is to interrupt a show because someone holding a large camera got trampled. So, show photographers sink into the corners, stay glued to the rails, and overall try and stay as hidden and out of the way as possible, while at the same time finding the best angles and lighting to make the exhibitors look as sharp as they can in the photos that will later end up on the American Royal social media platforms and show website.

And when the show is done, just as exhibitors have to return to their barns and take care of their animals before being done for the day, photographers have to return to their offices and take care of their photos. Downloading, sorting, editing, and posting pictures is a long and detail-oriented process comparable to fitting a show animal. If you skip a step, or get lazy, your pictures won’t look as pretty and professional as they could. And so, photographers get to relive the show day even after it is done, choosing the best pictures to show off the exhibitors to an audience much bigger than the one present in the bleachers at the time of the show.