News / Press / General / Why We Come Back

Why We Come Back 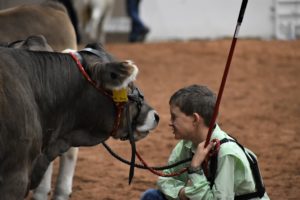 This year marks the 120th Anniversary of the American Royal. Years of tradition and continued excellence here at the American Royal wouldn’t be the same without one thing, the families that come and dedicate part of their year to make the entire show a success.

From an outsider’s perspective it might seem a little strange as to why stock shows and events such as the Royal are such a big hit. Questions often come up such as “Why would parents and kids come back year after year to the same place to exhibit?,” and “Why would families spend thousands on raising an animal, driving across the country, paying for hotel rooms, taking time off of work and missing school?” My personal favorite response has always been “Well that’s a weird way to spend a family vacation!”

The answer to their questions certainly isn’t because of the money, or the ribbons and banners that will collect dust over the years. Instead, to find the real reasoning behind it, they have to look at the passion that drives these families. They do it simply because it’s what they love to do.

The benefits that come from being a stock show kid aren’t always realized at the time, but in the long run they sure are worth it. Along the way, there comes an overwhelming sense of community that is shared between the exhibitors, both new and returning. We are all part of one big stock show family here at the American Royal and outside of it. The connections that are made at events like this stick with people throughout their future careers and life events.

The American Royal wouldn’t be the same without the passionate exhibitors, tireless volunteers, and families that have stuck with it over the years. With that being said, we want to say thank you. Thank you for your time, your dedication, and your love for what we do. We can’t wait to see you again next year!